I was one of a party of about 12 supporters who set off in January 2009 for two weeks to look at projects in Rajasthan with ‘Wells for India’.  The trip was known as a ‘Pani Yatra’ ie a ‘water journey’ which felt appropriate because all the water interventions that take place via the Charity are to minimise the time spent by women fetching water. 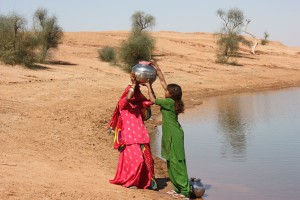 Briefly, a little about what the Charity does: it works with various partners in Rajasthan to help villages conserve the little water they do get during the rainy season.  They will not go into an area until they have complete agreement from the villagers and that can take years.  But once in, the charity provides the technical expertise and any materials that are not local, and the village themselves provide the labour.  In that way they own the project and are far more likely to maintain it. 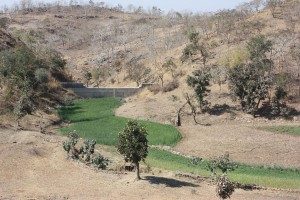 There are a variety of methods for slowing the progress of the water like anicuts, field bunds, and check dams which gives the aquifer a chance to be replenished.  This is all old, sustainable water wisdom which has somehow got lost, but which can make a huge difference.

So, our trip: I was a little anxious before we went, that we might not be all that welcome; after all, ‘we have History’ as they say!  However, India has a great tradition of hospitality and put that together with the fact that the projects have not been imposed upon them but work in partnership, and I was overwhelmed with the enthusiasm with which we were received.  How to explain India?  It assaults all the senses, and overturns every preconceived idea  you ever had about order and time; the cities are a glorious energetic vibrant muddle.  The country is surprisingly beautiful, one minute arrid and rocky, the next with green fields running alongside a stream like green jewels. And then you get a glimpse of women in their wonderful acid coloured saris walking across the landscape usually carrying some vessel on their head which makes their posture so beautiful!

We travelled out of the city of Udaipur which was our base for the first week in landrovers leaving roads far behind (how the drivers knew where they were going is a mystery); maybe driving for a couple of hours on dirt tracks to arrive at a given rendezvous where there would be a welcoming party to greet us with ceremony of bindies, garlands and then lead us on foot to the village. 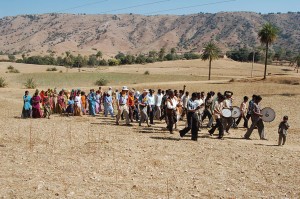 Procession in to the Village

Some times, if our journey had been slow, we could be anything up to a few hours late, and the welcomers would still be there, patiently sitting in any shade they could find, just waiting.  Then with great pride we were shown the work that had been done and the benefits were explained – how the women no longer had to spend four hours walking to collect water.  And the men could work on the land because it would sustain two crops and therefore they were not forced to migrate to the quarries for labour.

Once that was over, we would all gather under the shade of a tree, sitting on mats having first removed our shoes, and the speeches would begin.  These took some time as they had to be translated, often from a tribal language into Hindi, and then from Hindi into English so they did lose a little in that process!  This could easily go on for an hour; they made a speech, one of us had to answer, and so on. 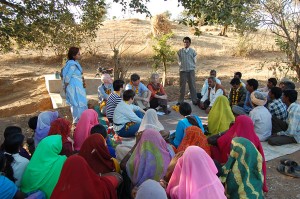 Speeches on the mat

Fascinating etiquette as to who sat where on the mats which gave great insight into how far the village had progressed with equality with their women for example. (That is me in the stripy teeshirt and the lady in the blue sari behind us is our translator.)  In this village in the picture, there is virtually no integration of the women and, as you can just see, they are not actually on the mat but on the edges. However, they are attending which was not the case in all villages.

There were some funny moments; one we were being proudly shown a new room which had been built for use as a play-group house, which was full of little 3-5 year olds.  A few of us went in to admire and say hello to the children who all promptly started wailing as they assumed we had come to do injections which white foreigners obviously had a habit of doing.  Quite disconcerting all round!

A fascinating trip: gruelling physically as we were sleeping in field centres on what can only be described as coffee tables, indescribably terrible loos, and food that was way too spicy for my delicate palate.

But – and especially from an artistic point of view – fantastic stimulus for work with amazing faces and beautiful colours. I wouldn’t have missed it for the world. 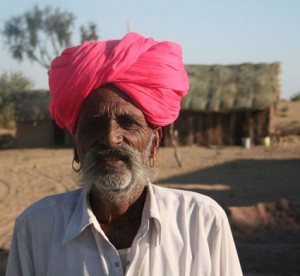 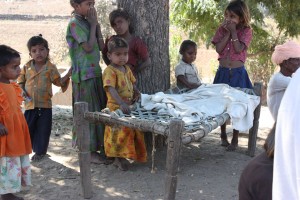