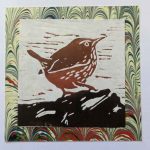 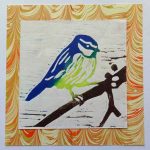 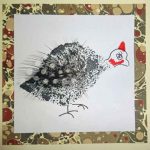 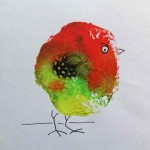 Niamh’s linoprint ‘there was a crooked man’

I was first asked to do a Linoprint Workshop by a local Art Society early last year and, much to my surprise, I really enjoyed it.  Teaching a small group of adults who have chosen to come is an altogether different experience!  And also, it was quite affirming as I realised how much knowledge and expertise I have acquired, just from my own practice.  Most people  have not done linoprints since they were at school and they are really amazed at how sophisticated a technique it can be, whilst remaining accessible and manageable ‘on the kitchen table’ as it were.  Here are a few examples of some work done by my students.

The image on the right above was made by Niamh – simple design and really successful.  We tried it in a couple of colours but decided one colour was best.  I love it – it looks like an illustration from a fairytale. 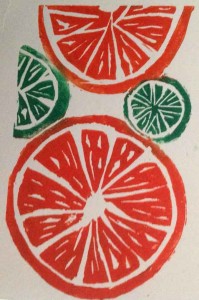 The next one on the left is by Grace – completely different style but equally successful.  It would make a great card and, again, she tried a few different colour ways and felt this was her favourite. Below right is a Christmas card made by Karen – a slightly more complicated design requiring two lino blocks, one on top of the other, but looks fab.  I feel like a proud mother!

Throughout the year I ended up doing quite a number of workshops for different organisations – usually no more than 6 people.  It is so exciting to see the anticipation as they peel back the paper to see what is revealed.  Chocolate biscuits seem to be essential to creativity – well I always knew that really! – and some excellent work was produced.  Now I am fully kitted up with the necessary sets of tools, rollers etc and I look forward to working with more students in 2016.  What larks!