I found myself hugely enthused by the Winter Olympics this year, particularly the Big Air and other snowboarding events. The mid air acrobatics were awe inspiring so I set up my camera in front of the Tv and then used some of the photos to create Screenprints. I am screenprinting in the old fashioned way: I reduce my photo to three or four tones, then cut a paper stencil for each of the colours. The tricky part is making the four screens register perfectly on top of each other – just a few mms out and it is spoiled. I have found making them quite compulsive and once I started I found I couldn’t stop! I have Open Studios (known in this part of the world as Oxfordshire Artweeks) coming up in May where I am exhibiting in Littleworth, just outside Faringdon so it will be nice to have a completely new set of work to put on display. I have attempted to set up a new Gallery in My Gallery called Screenprints to show off the new pieces – so far without success, but hopefully I will crack it in the end. Technology heh! I will add a couple of the pics here as a teaser while I sort myself out! Happy Easter! 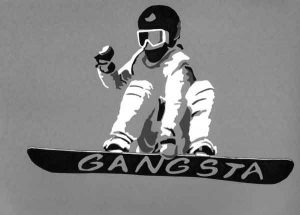